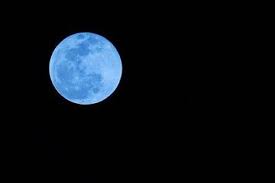 The nickname “blue moon” is a bit deceiving. In fact, the moon never turns blue. A blue moon simply refers to the second full moon in a month, which happens every two-year due to the mismatch of days in Gregorian calendar and the moon’s cycling. Usually, a full moon appears once in 29 days. But, in this case, with the desynchronization of our calendar and moon’s orbit, full moon happens on August 2 and August 31 as well. The second moon is called blue moon.

The last time blue moon occurred was in December 2009. After the first full moon on Dec. 1, the blue moon appeared in the sky on the New Year’s Eve on Dec. 31 in 2009. The next time the phenomenon is to take place is in July 2015. Indeed, it is a thing of great attraction for stargazers to see the blue moon, which may have some change in hue relative to the particle in the air.

According to Bill Kreiger, a professor of earth sciences and science education, a blue moon may have various hues in effect of the particles in the air. Based on lunar light, blue moon may reflect and refract through the atmosphere, Kreiger explains. As per the scientist, a full moon may have a set of starkly diverse appearances. “There can be a ‘blood moon,’ with enough red hues, and there can be lighter gold tones in summer, which gives us the term ‘honeymoon,’” writes the Evening Sun referring to Krieger.

Sky enthusiasts are highly excited to observe the Friday’s blue moon. Even if it is a usual incident, people have special interest to have a look at the second full moon of August. People with clear viewing conditions can get out and look at the sky for a glance of the blue moon, which starts at 6:00pm. If you have less than perfect viewing conditions, you can watch the live telecast of blue moon online.

The Slooh Space Camera will bring live broadcast of blue moon 2012 in honor to Neil Armstrong. The Slooh will start telecasting at 6:00pm “with a feed from the Prescott Observatory in Arizona and an observatory in the Canary Islands,” writes the New York Daily News. Sky watchers can just get in front of their PCs to have a view of the blue moon. Remember, you will have to wait until July 2015 to observe the next blue moon if you miss this on Friday. So make sure you won’t fail to see the blue moon this time around.

Armstrong’s funeral service really has no relation with the blue moon. But, the world has listened to the news that blue moon is to happen on the same day of his funeral with some enthusiasm. Anyway, it turns out to be the moon’s (the nature’s) honor to the greatest astronaut ever. Armstrong, the commander of NASA’s Apollo 11 moon mission walked on the moon in 1969, making a history in human’s space explorations. Even after his death, the astronaut from Ohio will be remembered forever for his bravery and courage to fly to the moon with his mates.